What a year it has been at The Swan! So much has happened in 2019 that we thought that it was only right that we take a look back at the incredible amount that we have achieved and amazing community that we have become.

The year started with the great news on 10th January that contracts had been exchanged for the purchase of the pub! 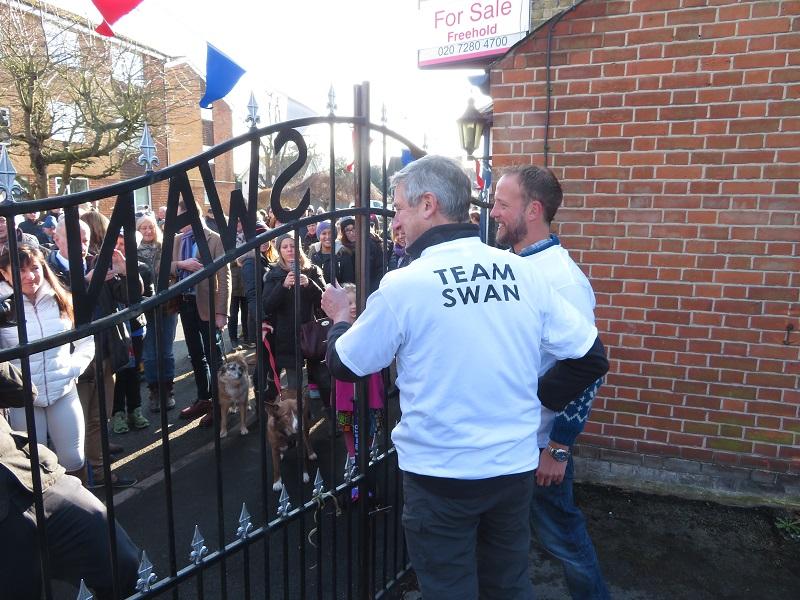 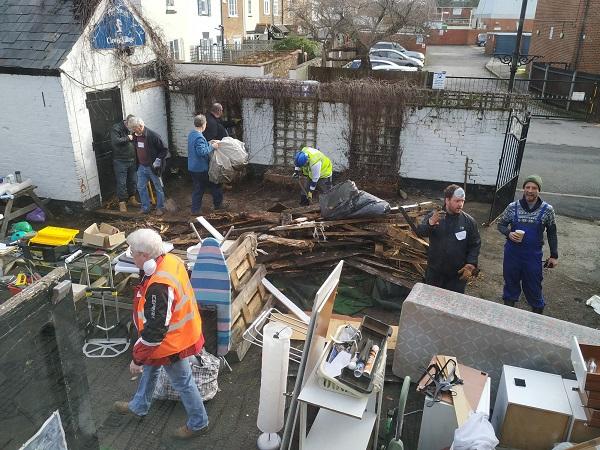 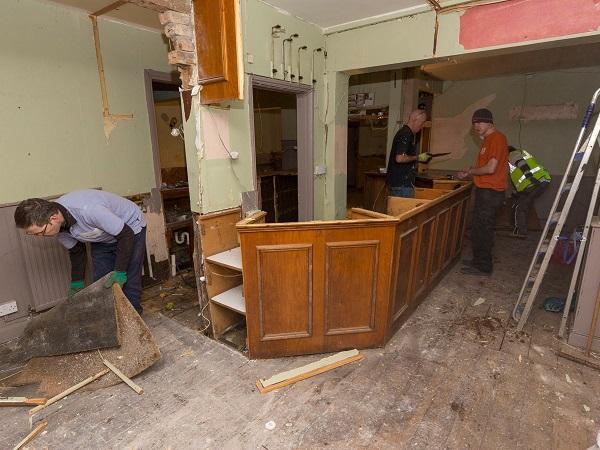 On 29th January we finally got the keys and on 2nd February we held the Ceremony of the Keys to celebrate. It was cold and snowy, but over 200 people came along to raise a toast to The Swan – the first time that the public had been able to access the premises in nearly 3 years.

A week later, we held our first volunteer weekend and over 60 people turned out to help clear the site. There were plenty of surprises along the way, as we discovered everything from high heels to a (very old) joint of ham, but by the end of day two, the place was barely recognisable, with the old bar completely removed.

March was a month of demolition & stripping and clearing & sanding – plaster, wall paper, wire and woodwork, as the building was allowed to breathe again and we began to understand what was going to be needed to bring it back to life. 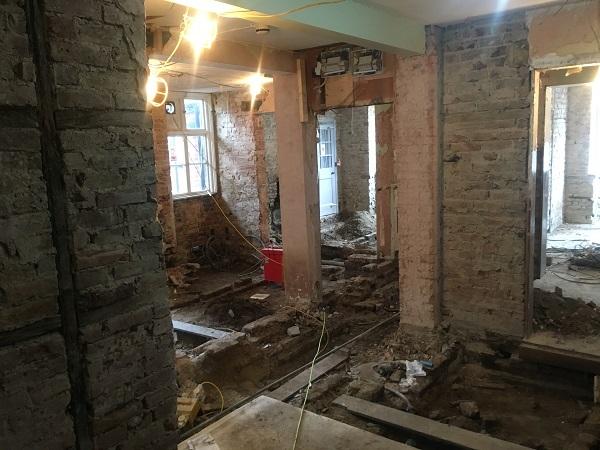 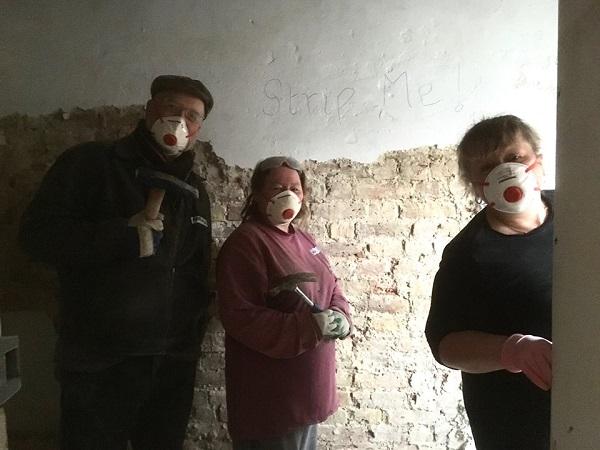 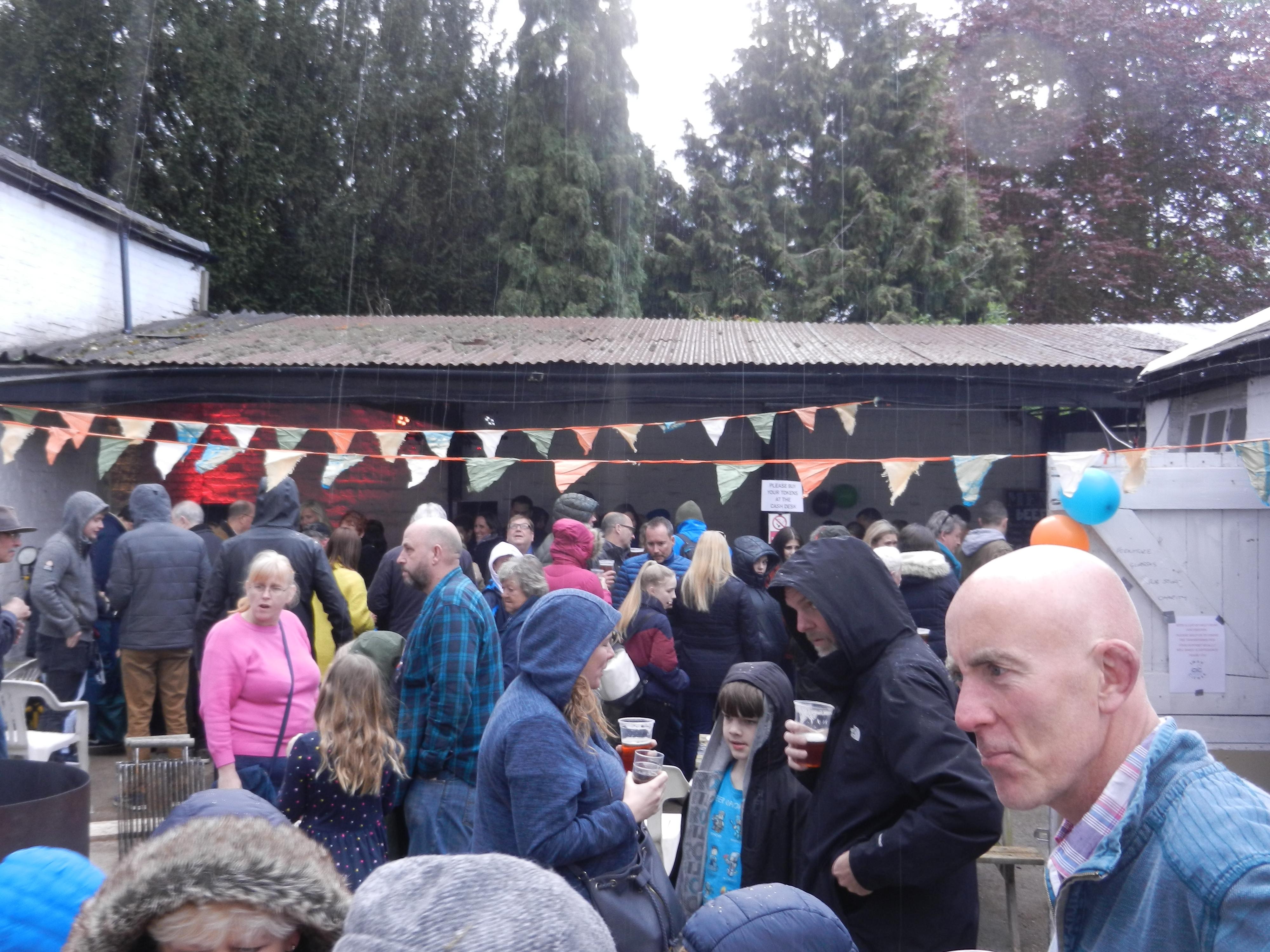 But it wasn't all work, as the end of March saw us party with The Skangsters at The Old Court, in aid of our refurbishment fund and in April, we held the first of our Sneaky Beak Barbeques.

The community enjoyed a pint and a burger, a tour of the building to see progress so far and music from Mark and Sheridan. It was great to see the community support for the project growing.

In May, work carried on apace, but The Swan also became a film set for a few days as Alish Castillo used the upstairs bedrooms to shoot her first short film, The Widow. Although the story is set in early 1950s Ireland, the bedrooms at The Swan provided the perfect film location. The film has now completed post-production and Ailish is now entering it into a number of prestigious film competitions. 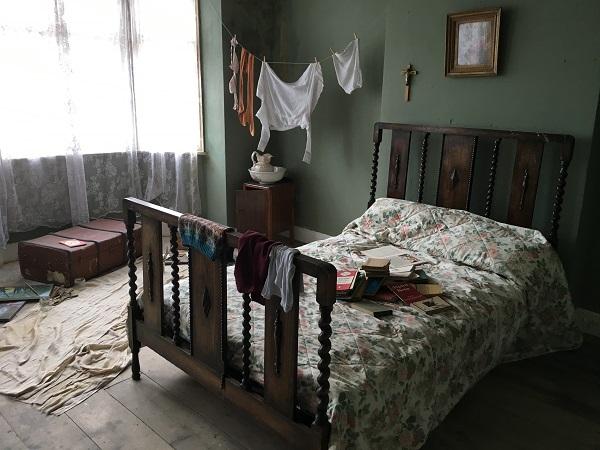 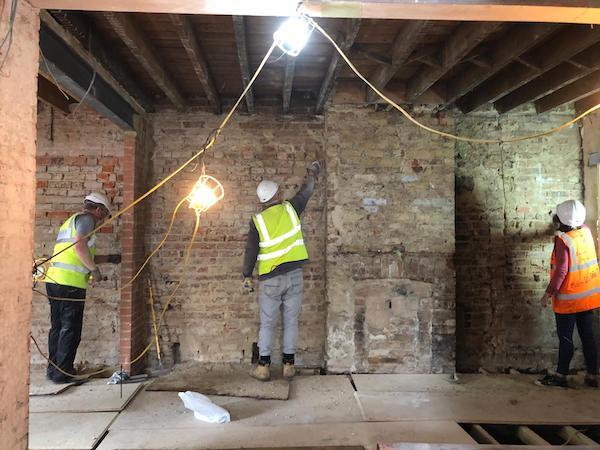 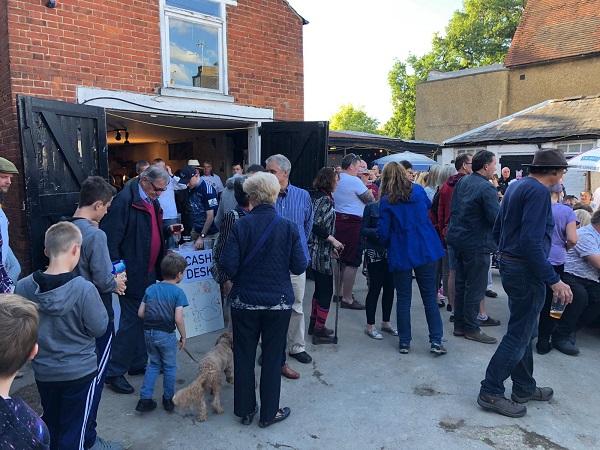 June was another busy month, with three more Sneaky Beak Barbeque. In the bar, the new steel supports and the start of the new floor went in, whilst plaster boarding started in the School House.

At the same time, the The Friends of The Swan were out and about at The Swan Lifeline and Rotary Summer Fayre raising funds and awareness of the project.

It took more volunteering days, finishing the bar floor, a lot of plaster boarding and late nights, but on 20th July, we unveiled our new sign and opened for the first time! Our bar was temporary and all seating was outside, but this was a major milestone for us.

The first pint was served to Rene Lowe as our oldest customer at 97 years young! We have been open almost every day since. 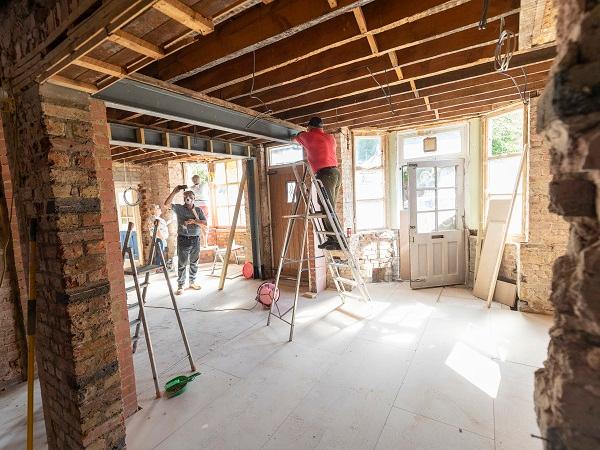 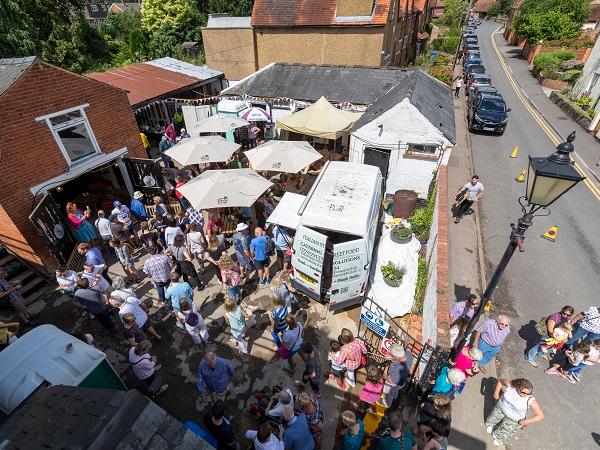 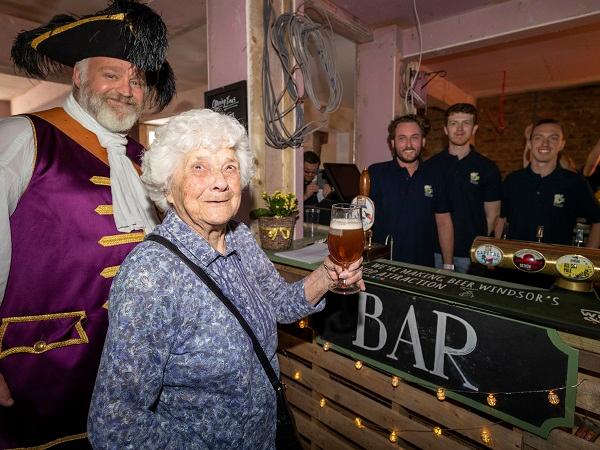 In August, we took advantage of the summer evenings to host a series of barbeques and a Bank Holiday Brunch. Ian and Tony took their cooking responsibilities very seriously and the courtyard was packed every Saturday. Huge thanks to all of our chefs, volunteers and musicians, who made these events such a success.

Work still continued inside though, with more plastering, painting in the main bar and preparation of exposed brickwork…. It was all starting to come together nicely!

As the nights drew in, we retreated into the bar, as with a lovely new floor now uncovered and the main bar fitted, we held our first Quiz Night with Quizmaster, Steve Long. An amazing 120 people participated, with not a spare seat to be found in the bar, School House or Courtyard. 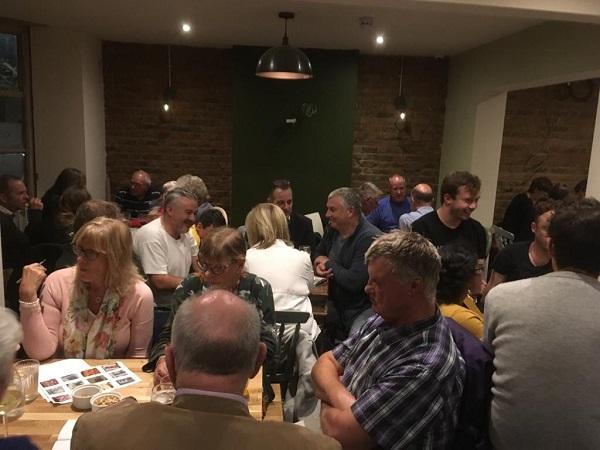 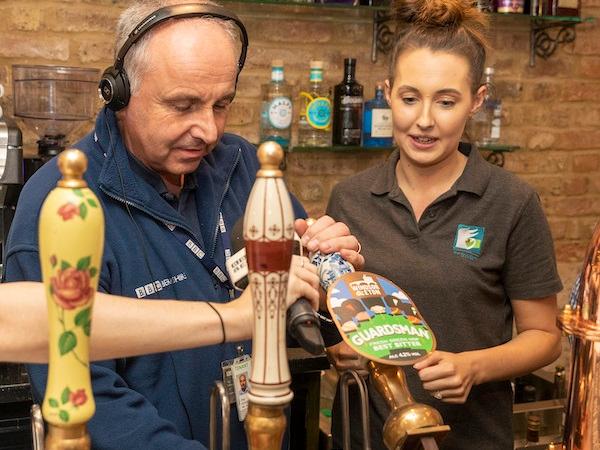 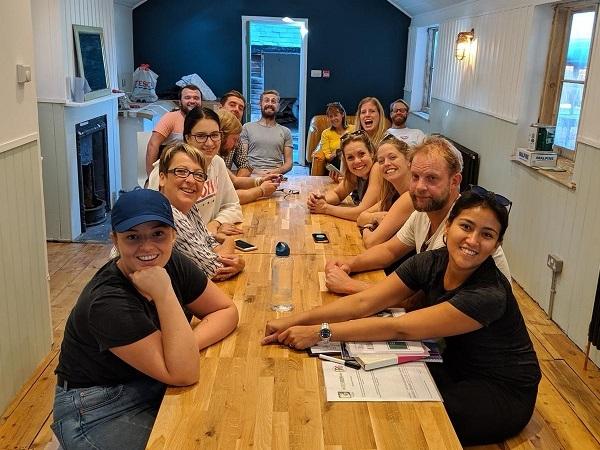 We said a huge thank you to Alex Loveless who ran 50km of The Thames Path Challenge in aid of The Swan; held a clothes swap event, the book club started and were a venue for the Windsor Fringe Arts Festival. The pub started to open in the day, the keg bridge went in and there was more painting, but most importantly, The Green Room Sixth Form students started lessons from the School House, achieving another of our major milestones.

October started with us hosting an outside broadcast of The Phil Kennedy Show on Radio Berkshire, with Phil learning to pull his own pint! We had live music from Astronaught and ended the month with pumpkin carving and ghostly antics behind the bar on Halloween.

There is no rest for the wicked though and work continued fitting the radiators, the dark green appeared on the walls and skirting and other finishing touches were added whilst progress was made on the office.

In November, we held our first Macmillan Coffee morning and raised funds for Children in Need, as well as holding our first Bonfire Night with a barbeque, toffee apples, popcorn, sparklers and a roaring fire.

November saw soffits and fascias fitted on the roof and a huge amount of rubble and debris cleared from the courtyard and stables. Crucially, our "last orders" bell was fitted – many thanks to Colin (Jock) for the donation. 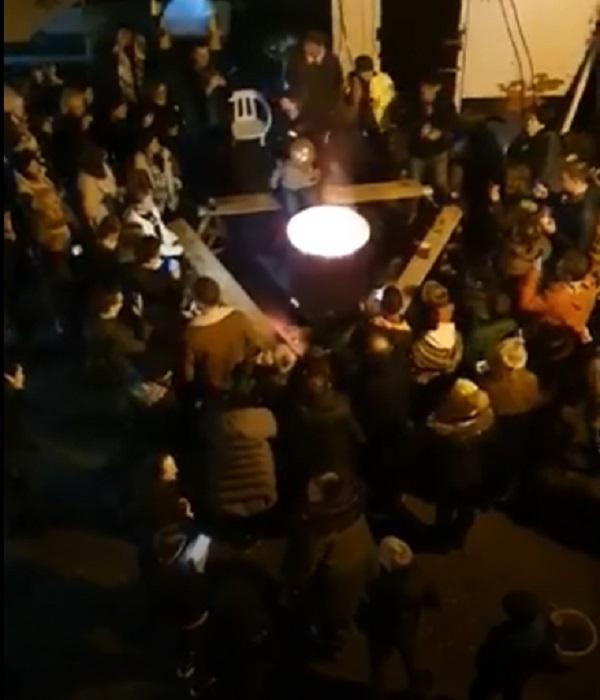 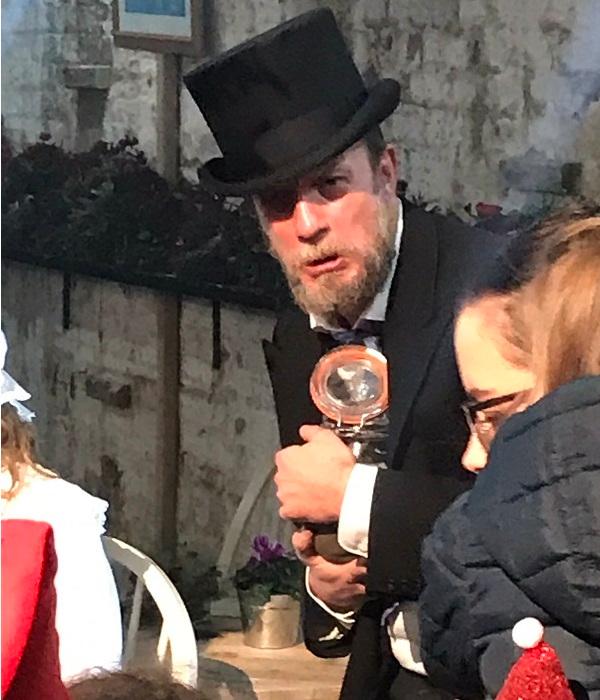 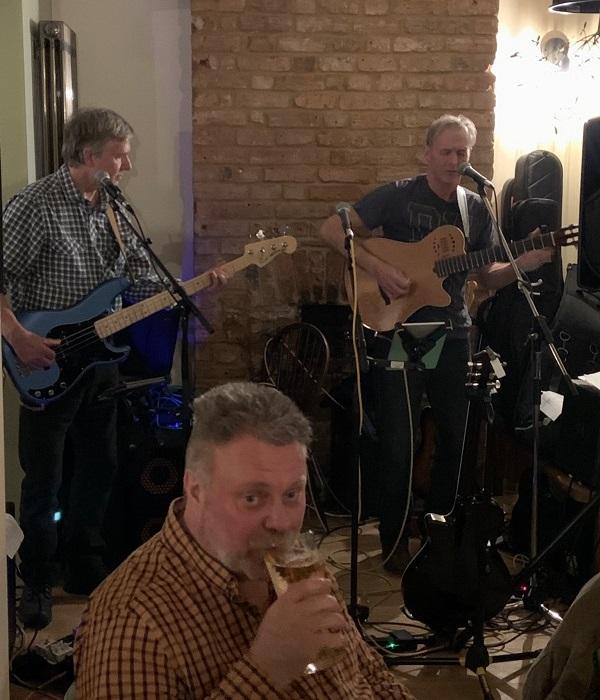 December has been our busiest month to date, with Christmas Decoration making, Christmas Carols, Morris Dancing, a Christmas Quiz, Live music and the amazing Winter Fayre, organised by the Green Room students. Plus, the never to be forgotten staging of A Christmas Carol for the Windsor Living Advent Calendar!

Work has still continued though, with vital repairs to the chimney stacks and stable roofs, plus preparation for the office and future major works in the kitchen. You may not always be able to see it, but there is always renovation work ongoing somewhere.

2019 has been amazing, with equal amounts of hard work and fun. This is just a snapshot of everything that has happened at The Swan this year. You can see much more in the Renovation Diary and Past Events sections of our website – you might even spot yourself in the photos. Please send in your photos and videos so we can add them.

There is still a lot to do to continue the journey of our ugly duckling into The Swan we all know it can be, but we would like to take this opportunity to say a huge thank you to all of our investors, supporters and customers.

We hope to see you all later at The Swan to celebrate the New Year, but if not Will, Richard, The Bar Staff, The The Friends of The Swan and The Green Room School wish everyone…